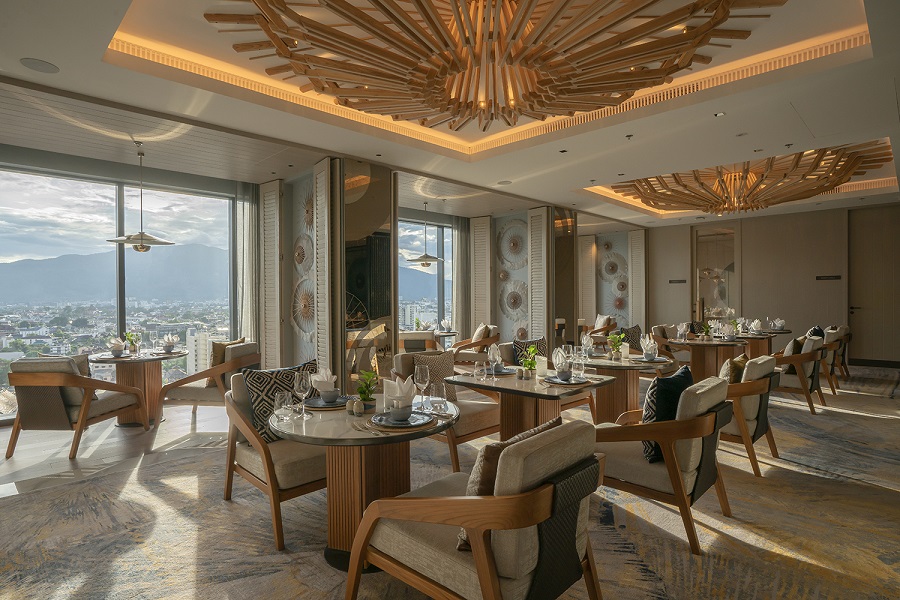 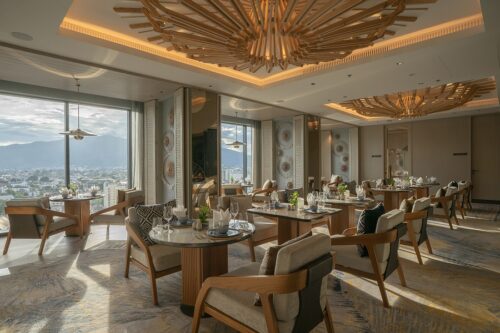 Meliá Chiang Mai, on Charoen Prathet Road in the heart of Chiang Mai, has opened its signature restaurant Mai Restaurant & Bar on the hotel’s 21st floor with panoramic views of the city and famed Doi Suthep Temple on the mountaintop to the west.

Adjacent to the hotel’s executive lounge and tucked under the highest rooftop bar in the city, the 38-seat restaurant is a visual marvel. Diners enter the venue under an arch that pays homage to a nearby temple. In a salute to Chiang Mai’s Bo Sang Umbrella Village, large lit installations of umbrella ribs cling to the ceiling. Various artworks of umbrella canopies hang on the walls, such as those made from antique Chiang Mai textiles. The carpet’s concentric patterns, in the likes of gun-metal gray, periwinkle and soft amber hues, reference umbrella tops in a striking yet subdued way.

“Given there are so many local restaurants in our vicinity that offer a great bowl of food, we knew from the outset that Mai Restaurant & Bar needed to be different with not just an aesthetically pleasing environment and a great view but also with one-of-a-kind dishes,” said the hotel’s general manager Edward E. Snoeks.

“The menu celebrates traditional Lanna cuisine in a contemporary fashion with Mediterranean touches, each dish is so distinctive due to profound combinations of ingredients and textures, and the ‘360° Cuisine’ program promotes healthy and sustainable eating based on ‘farm to plate’ and ‘plate to farm’ processes.”

Under the stewardship of award-winning executive chef Suksant Chutinthratip (Billy) and sous chef Karn Phojun, each dish from the restaurant’s seasonal menu is prepared à la minute from an open kitchen.

Of the 28 vegetarian, vegan, meat and seafood menu options, 12 belong to the hotel’s ‘360° Cuisine’ concept, which has been designed to minimise waste and carbon emissions. Under the program, the chefs craft dishes using produce from the hotel’s nearby organic gourmet farm partnership with ORI9IN, and use every part of each ingredient possible before leftovers are returned to the farm as compost.

With 28 years of hospitality experience, Chef Billy was previously the executive chef at some of Bangkok’s top hotels. Chef Billy began his hospitality career in 1994 as a cook helper and climbed the career ladder at various hotels in Thailand as well at Lotus One in Dubai and Raffles Singapore.

After 19 years as a chef, Chef Karn joined Meliá Chiang Mai late last year from work as a sous chef at Bangkok-based Michelin Guide restaurants Baan Suriyasai Royal Thai Restaurant and Saneh Jaan. Starting out in 1993 as chef de partie at Mahanaga Thai Fusion Restaurant, his career has taken him as far as Switzerland where he was the head chef at Michelin Guide restaurant Patara.

About Meliá Hotels & Resorts
Meliá Hotels & Resorts is the best-known international brand in the portfolio of the Meliá Hotels International company; it has more than 100 city and resort hotels in the main leisure and business destinations of Europe, Asia, Africa and America. The brand offers exemplary meetings and events facilities in all important business cities as well as in exotic locations, catering to the ever-expanding conference and incentive travel market. As part of its innovation philosophy and new positioning, Meliá Hotels & Resorts has reinvented itself to cater to every aspect of the guests’ wellbeing. Unique experiences are created for guests and are defined by relaxation, quality time and personalised services. For a balanced lifestyle, Meliá Hotels & Resorts instinctively understands the guests’ needs and lifestyle expectations, which is an integral part of its redefined identity.

About Meliá Hotels International
Founded in 1956 in Mallorca (Spain), Meliá Hotels International operates more than 380 hotels (portfolio and pipeline) throughout more than 40 countries, under the brands Gran Meliá Hotels & Resorts, Paradisus by Meliá, ME by Meliá, Meliá Hotels & Resorts, The Meliá Collection, INNSiDE by Meliá and Sol by Meliá, plus a wide portfolio of affiliated hotels under the “Affiliated by Meliá” network. The Group is one of the leading companies in resort hotels worldwide, while also leveraging its experience to consolidate the growing segment of the leisure-inspired urban market. Its commitment to responsible tourism has led the Group to become the most sustainable hotel company in Spain and Europe, according to the last S&P Global Sustainability Yearbook 2022 (Silver Class distinction). It also has ranked seventh in the Wall Street Journal’s list of the 100 most sustainably managed companies in the world (and the leading travel company) and is the only Spanish travel company included in the list of “Europe’s Climate Leaders 2021” by Financial Times. Meliá Hotels International is also included in the IBEX 35 Spanish stock market.